This comes after the curvy actress was seen sharing adult toys at her mother’s memorial.

Following her act, the user, identified as Leke took to Twitter to compare Nkechi to the “Zazu” crooner, Portable, adding that she is a bigger nuisance than he is.

“Forget packaging, Nkechi is a worst public nuisance than portable” 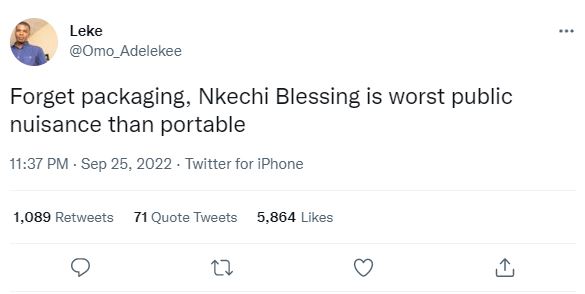 Recall, Nkechi got dragged by social media trolls after the video where she was seen sharing adult toys surfaced on social media.

However, she silenced them, noting that no one took care of her mother when she was alive, hence they had no right to criticize her.

So Guys, Nkechi Blessing Is Worst Public Nuisance Than Portable

Do You Agree With This?